Mount Elgon National Park is found in Eastern Uganda is located near Mbale and lies across the Kenyan border covering 1,145 square kilometres. Mount Elgon is known to be the fourth highest mountain in East Africa and second highest peak in Uganda, towering up to 4321 meters with the second-highest peak in Uganda. Mt. Elgon, an extinct volcano is believed to have first erupted more than 24 million years ago. Locally known as Mt. Masaba, Elgon has got three other major peaks which are Kiongo (4303m), Mubiyi (4210m) and Jackson’s summit (4165m). 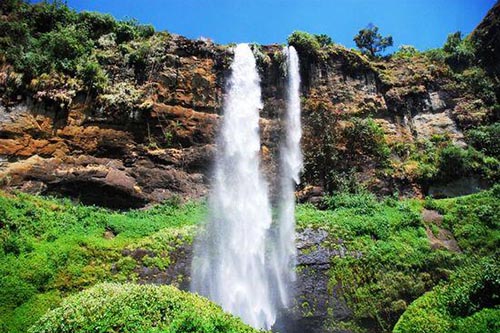 Masaba is the name of the founding ancestor of the Bagisu believed to have emerged from a cave on its slopes several centuries ago. Masaba’s spirit is believed to be personified by Jackson’s Summit but may be the taller Kiongo peak. The mountain is also an important watershed for different rivers including River Sipi that forms the spectacular Sipi Falls. The mountain slopes support a rich variety of vegetation zones like the montane forest, high open moorland covered by the worldly giant lobelia and groundsel plants. The mountain has crater covering about 40 kilometres on its top surrounded by a multiple rugged peaks.

Mount Elgon National Park  has a large variety of fauna and floral species, for instance the Bamboo, heath and moorland zones plus animals such as leopards, Blue and White Colobus monkey, hyena and buffaloes. The bird species comprise of the African Goshawk, Mackinnon’s Fiscal, the Baglafecht weaver and many others.

Bird watching, mountain hiking, trekking, day hikes and forest exploration, camping, guide escorts are among the major activities. A variety of attractions outside the park like lodging facilities and campsites plus the magnificent Sipi Falls situated 66 km from Mbale make a tour enjoyable. Community visits and involvement in Imbalu dances, nature walks from Budadiri trail-head can also be done.

As you move up along Elgon’s slopes, you will go through thick montane forest with mixed bamboo belts characterised by birdlife. You will then join interesting heath and moorland zones with several interesting endemic plant species that is the Giant lobelia and groundsels. Lovers of wildlife will spot primates such as the Black and White Colobus Monkey, Blue Monkey, uncountable fascinating bird species like Golden Winged and Tacazze sunbirds, Ross’s and Hartlaub’s Turacos, Black and White Casqued and Crowned Hornbills. The vulnerable Lammergeier and the Jackson’s Francolin found nowhere in Uganda except here will be seen. With a keen observation, you can also see buffalo, elusive leopard, duiker and the shy hyena. Also interesting to see are the forest monkeys fill the forest canopy as giant forest Hog, Bush buck, Antelope, Civet, Wildcat, Bush Duiker, Jackal, Rock Hyrax and Elephant move around the forest and moorland.

Trekking in the Routes

The area has two main starting points that lead to the Elgon peaks.

Hiking is the main tourism activity. Climbing the mountain is not so much tiresome meaning it can be done by medium and experienced climbers. Besides the interesting and unique plants and animals, one can experience the magnificent waterfalls, big caves, scenic peaks and gorges and marvellous hot springs which bubble up at 48’C. The ideal visiting periods are the dry seasons, that from June-August and December-March. But still even cold months, trekking is possible and enjoyable. Technically, with or without climbing skills, one can hike and hikers can go to all major peaks with ease.

What to bring for the tour

There are 9 campsites situated at various points along the trekking circuit. It’s advisable that tourists respect park regulations by staging camps only at gazetted sites. No camping is allowed within the caldera. The mountain’s camping is primitive and traditional requiring all essential camping equipment to be carried by the visitor. But items like tents and sleeping bags are readily available for hire at the park. Carry a warm jacket and rain gear for unpredictable weather conditions at the mountain during the tour. A fuel- camp stove is also necessary for domestic use to avoid abusing the nature firewood.

There are trained ranger to guide you on all trekking excursion since they are well-conversant with the routes, safety measures, communication and cultural histories of all the places trekked. Local porters will help in carrying up to 18 kilogrammes of your gear, prepare meals, setting up and removing your camp plus collecting water for use. Fees are set at Ush 8,000 (guide) and Ush 7,000 (porter) per stage.

The wages cover the guide or porter’s park visitation fee and the cost of sufficient food and supplies. Trained ranger guides and local porters are available at all trail-heads. Please ask for a guide’s license before hiring to ensure you are dealing with the right person. As a matter of safety, a ranger escort must be hired when visiting the calderas or ascending the peaks. You will meet your ranger escort at Sasa or Piswa patrol hut where you must present your park receipt before moving ahead upwards.

At Mt. Elgon, the Forest Exploration Centre has a 3-day trail covering about 3 to 7 kilometres. The trails give a nice experience of Elgon’s rare flora and fauna a shot time. To reach the enormous Tutum Cave, 11 km from the centre, you are facilitated by s fourth trail that was recently opened. It goes through a range of vegetation types paving a clear sight for wildlife such as Black and White Colobus Monkeys and a variety of birds.

The wonderful Sipi Falls are located 66 km from Mbale, en-route to the Forest Exploration Centre and Kapkwata. Many local trails enable day hikes through friendly local villages with beautiful farming. Pleasant campsites, lodge facilities, including meal services and hot showers are offered at Crow’s Nest located near the Sipi trading centre. More luxurious accommodation is at the Sipi Falls Resort. Better get a guide to take you gradually through the one and half hour walk to the Forest Exploration Centre. Nagudi rock has 7 open rock-climbing routes, half-way between Mbale and Budadiri. Climbers need to carry their own rock-climbing equipment because these routes are bolted. Climbers pay to the local parish treasurer.

Simple accommodation facilities are available inside the Park at the Kapkwata Rest House and the Forest Exploration Centre at Kapkwai. Prior arrangements through the MENP Visitors’ office in Mbale are necessary as these facilities do not accommodate large numbers of visitors. Kitchen services are available, but visitors should bring their own food supplies or provide money to buy food on arrival . The Forest Exploration Centre also conducts a four-day environmental program for school groups of up to 30 students which allow children to experience a living forest ecosystem while learning the importance of conservation. It has dormitory – style rooms and bathing facilities with running water.

The park is 235 kilometers east of Kampala. One drives via Jinja to Mbale town at the western base of Mount Elgon, before climbing to Kapchorwa on the mountain’s north-western axis. Murram roads lead off the Mbale Kapchorwa road to reach the various trail-heads. In Mbale town Mount Elgon National Park Information Office is on Plot 19/21 Masaba Road, near Mount Elgon Hotel. This office which is open from 08.00-13:00 and 14, 00-17, 00, Mon-Fri and 09.00-13.00 on Saturdays is available to give you enough information about the park. You can book tour activities at this office or at Uganda Wildlife Authority offices in Kampala.