Ziwa Rhino Sanctuary also know as Ziwa Rhino and Wildlife Ranch is found in Nakasongola district and a home to wild rhinos in Uganda. The Rhino reintroduction project is a joint scheme by the Rhino Fund Uganda and Uganda Wildlife Authority (UWA). 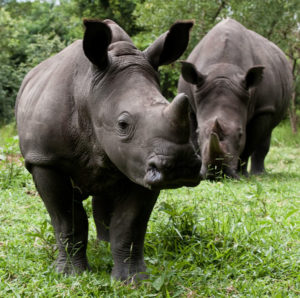 Rhinos at the Ziwa Rhino Sanctuary

The ranch is located 176 km (100 miles) north of Kampala City along Kampala- Gulu highway. This rhino attraction, one of the tourist attractions in central uganda is also on the road to Murchison Falls National, a major destination for wildlife safaris in Uganda. Ziwa Ranch is the only place where you will manage to view rhinos in the wild in Uganda. Currently, the sanctuary that has become progressively familiar with tourists who flock it for rhino trekking, bird watching, nature walks plus relaxation is a home for 22 southern white rhinos. Rhinos, a short for Rhinoceros are among the the Big Five animals. There are two species of Rhino in Africa, the Black Rhino and White Rhino even though they do not differ much in colour. The term White Rhino originates from the Dutch word ‘wyd’, that means wide and refers to the wide mouth which allow it to graze.

Make a tour of Ziwa Rhino Sanctuary and find out more Things to Do and See including:-

Rhino Trekking is the major tourist activity at the Ziwa Rhino ranch. The sanctuary has trained rangers who will capably guide you through this wild excursion. You will have the chance to spot the rhinos at safer close distances. Besides rhinos, you will also have an encounter with a variety of other wildlife animals including the Uganda kobs, rich bucks, oribis, reed bucks, hippos and crocodiles among others.

The place is as well home to about 250 bird species and is a great hub for avid birders who want to find those rare African species of birds. Skilled and knowledgeable bird guides will support you to have a wonderful experience. Some of the bird species include:-

With such guided nature walks, you will be able enjoy the geography, animals, and plants of this attractive part of Uganda.

The Ranch’s campgrounds are perfect solar power and a standby generator as a backup. The facility rooms have light and warm water for shower. To visit Ziwa Rhino Sanctuary, one can take it as a day trip from Kampala and back or tour the place en route to Murchison Falls National Park while going or return. Many of the Murchison Falls safaris and tours usually include rhino tracking at Ziwa. It is also visit-able while on a chimpanzee Tracking Safari to Budongo Forest.

Getting to Ziwa Rhino Sanctuary

The Sanctuary is 7 kilometers off Kampala-Gulu Highway, branching off at Nakitoma trading centre. This rhino farm is increasingly becoming popular with visitors interested in rhino trekking touring the place on a daily basis. Tourists go to Ziwa which going or coming from their Uganda safaris and tours in Murchison Falls National Park. 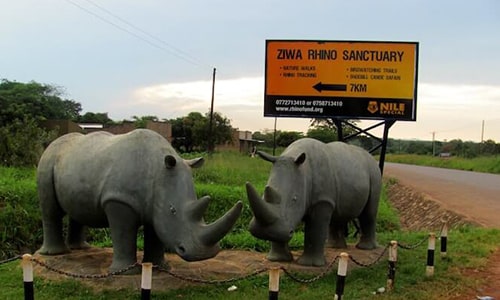 Book and Enjoy a One Day Rhino Trekking at Ziwa Rhino Ranch. This trip to the sanctuary is one of the several 1 day tours in Uganda from Kampala and is a once in a lifetime opportunity to see the giant rhinos