Uganda – The Pear of Africa

Uganda, globally known as the Pearl of Africa is a country found in East Africa. The country borders Kenya to the East, Tanzania to the South, Rwanda to the South western, Democratic Republic of Congo to the West and South Sudan to the North. This sovereign state, which got its independence on 9th October 1962 is a landlocked country with 10 national parks, several game reserves and sanctuaries plus numerous cultural and nature attractions. We a population of about 40 million people, Uganda’s economy relies mainly on agriculture, industries and tourism among others. The climate of Uganda is temperate to subtropical, with two seasons of rain and two dry seasons in every year. The country’s national parks make up the its tourism with gorilla trekking, chimpanzee tracking and wildlife safaris and tours taking up the biggest percentage. 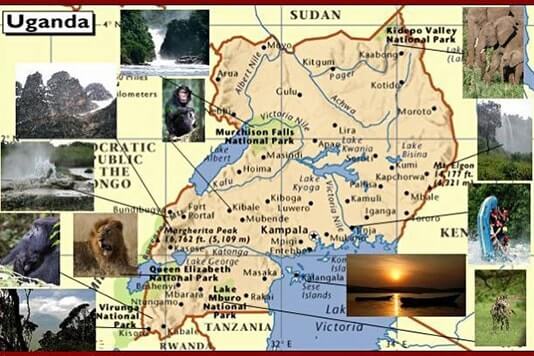 Uganda is the land disparity endowed her Natural beauty from the physical wonders of unrivalled Ecosystems from western frontiers to the densely forested swamps and drainage conduits as Nile River, Albert past the rain forests, ragged, central plateau to tall volcanic mountains of the eastern expanses of plains of rich fertile land all over No wander agriculture is a favour given varied climate zones with clear disparity hence an accolade as “the pearl of Africa” in the heart of the continent. Coupled with a
unique cultural diversity gives alias land of beauty a fairy-tale! “You climb up a railway instead of a beanstalk, and at the end there is a wonderful new world”-Churchill Winston.

The people who lived here before the invasion of Bantu speaking people in 1700’s survived on hunting and fruit gathering. Later the Bantu used the land for subsistence agriculture and domestication of animals until the British invasion in 1894 with commercialised agriculture of large plantation mixed human labour and mechanisation to yield productivity. This remained as legacy even after 1962 the country remained a big wig as far as agriculture was concerned.

The land of wonders however can’t get over the ordeal of being landlocked with total land area 241,551 square kilometres and of this 41,028 square kilometres are land area under/ below sea level. The area
is seats on the East African plateau in the heart of Africa bordered by Kenya to East, South Sudan to the North, DR.Congo to the West, Rwanda and Tanzania to the South dominated by plateau and rims of rolling
highlands with highest altitude of 5,111 meters above sea-level at the Margherita Peak of Mountain Rwenzori sloping gradually downwards towards the north where the lowest point is found in Albertine rift valley at 620 meters below sea-level.

Uganda alias “gifted by Nature” draws its name from Buganda Kingdom covering the Southern and central part of the land mass encompassing Kampala the Capital and commercial Centre as well as Entebbe
international airport along the showers of the substantial portion of Lake Victoria one of world’s largest fresh water lakes shared with Kenya and Tanzania with its numerous islands. Not withstanding the humiliation of land locked, there’s a lot to brag about doubling as a member of great lakes (Albert, Edward and Kyoga Turkana and Tanganyika) and Nile basin regions that comprises the Victoria Nile drains from Lake Victoria into Lake Kyoga and later into Lake Albert on the Congolese border before entering south Sudan.

More other drainage systems include crater lakes in Kabarole, Lava dammed lake of Bunyonyi yet to be named the deepest, Spectacular Kazinga channel, rivers, of Katongo, Kagera as well as many from mountain as Mubuku, Suam river part of the internal drainage basin Lake Turkana. All these have great features and control the drainage system as evidenced from the connectivity.
The combination of this relief with patches of tropical rain forests, there has been a variation in general climate with a modified equatorial and Tropical weather conditions marked with two dry spell from December to February and rainy season in between until June when spell sets in again up to August but it will be noted the northeast region is semiarid. Uganda experiences sunshine throughout the year with warm temperature as opposed to hot despite the fact that it is a stride the equator, as it has been reported that average rain volumes of 100 cm are received annually triggering regular heat of 26 °c, incredible gift of
nature with flourishing finest weather.

The gifts of nature by physical feature and strategic location has played a vital role in development of tourism sitting the wildlife both the flora and fauna well protected in conservation areas including the
10 National Parks and 13 reserves with Unique attractions as like the Mountain Gorillas,
chimpanzee, birds, reptiles, and handful of mammals. The wild life is supplemented by the lakes, rivers, Mountains, valleys, forests reserves, and favourable climate coupled with a rich historical features spread in the country, minerals and unique cultural diversity of varying customs from the hospitable residents this has given it a fundamental growth in the recent decades and was named NO.1 Travel Destinations 2012 by Lonely Planet having received over hundreds of thousands of visitors for various activities as birding, mountaineering, game viewing, tracking, Cultural encounters, boat cruises and sightseeing.

Tourism is destined to attain a booming trend with reasonable GDP sweeping figures that agriculture has yielded over time once concerted effort to protecting conserving the existing resources is done by stake
holders amidst awareness campaigns everlasting resolution to widespread poaching intermittent conflicts with in and around the country that offers a slice of any attraction one would love to see elsewhere in
Africa. “The whole of Africa is concreted in one small country-Uganda”

Demography is a grief tale is dominated by young and rapid growth estimated to be having more than 36, 884,000 people as of 2014 census on a fixed 241,551 square kilometres of land making it the 38th populous state in the world with an overwhelming population growth of more than 10.6 million people in less than 12 years. This rapid escalation is attributed to the high fertility rate estimated at 5.97 births per woman one of the highest on top five list in the world, other reports assert it to, relative peace, reduced mortality rate improved health care. On centrally, UNHCR claims that the latter hosted more than 190,000
refugees only in 2013 from her neighbours of Kenya, Rwanda, DR. Congo and South Sudan and Hospitality of natives given the loose boarder scrutiny. This population is now mixed with foreign residents and Kampala has more than 2,000,000 people due to relative service provision whereas the rest resides in the other towns rural regions of the country. The life span of citizens has been recorded to be an average of 45 years with the gender equation out showing more female than men.

Despite the fact being a multilingual nation and issues of equality, the colonial master’s language(English) was adopted and enshrined in the constitution this was later amended in 2005 to incorporate Swahili that
has gained sheer grip in the Great Lakes region as evidenced in the police, military forces as well as early traders who cherished the status compelling political groups in power use it as unifying dialect
owing to the mishap created by varying education levels, ethnic groups and intermarriages. Other languages are also applied in the societies according to composition like using clearly different languages to date such as Rukiga, Runyoro, Runyankole, Rutooro for the Bantu speaking tribes from western Uganda, Lungada dominating the Central, Langi, Lugubar, Luo and Alur for northern,West Nile section Where as
Japerdole, Lugishu and Ateso covering the Eastern parts of the country with many intermediate and outlaying langues due to intermarriages, civil wars and immigrants. Therefore for unity and official
communications English has taken centre stage.

The Politics arena has gradually taken shape with Gen. Yoweri Kaguta Museven as fountain of honor, commander in chief and president of Uganda who came to power in January 1986 after a protracted six-year guerrilla war taking over from Gen. Okello Lutwa who was 07th leader in office of the Republican state that attained independence from British colonial master in October 1962. He is serving his 5th term under a decentralised system of governance with central and local governments inform of districts subdivided into counties, sub counties/Municipalities, Parishes and smallest unit of village local councils. As of 2014, he country had 112 districts with 181 counties split into 1,382 sub-counties including 01 city, 22 Municipalities and 174 town councils. All are represented on in the three arms of government
(Legislature/Parliament, Executive and Juiciary) as more of this is borrowed from the trials of British governance (1894-1962).

On the other hand, traditional leadership is deemed to be parallel to the state administration with an autonomous to regulate and monitor the activities the traditional kingdoms that enjoy cultural autonomy with government watches. The main kingdoms with vibrant operations include Buganda, Bunyoro, Toro, Busoga and Rwenzururu kingdom under state censorship for non-correspondent operation whereas the Ankole kingdom was abandoned with hopes of reinstatement. The government also recognised various others units of cultural setting in form of chiefdomS as Supreme chieftainship of Iteso, lango, Japadhola and union of Alur
chiefdom.

In a faith based composition is concerned it will be noted that there is freedom of worship in the state with Christianity dominates with an estimate of 85% of the total population. For instance the Roman Catholics taking 41.9% with the greatest concentration in Northern and West Nile whereas the balance of 35.9% being Anglicans from the Church missionary society from England. The ever mushrooming religions with similarly affiliated mode of operation as Adventist, Protestants, Evangelical, revival ministries and Pentecostals joined band wagon of insignificant Orthodox community to overtake the Islam’s position living it with only 12.1% with more cited in Iganga where the following minorities can never be ignored as far as shape of religion in the country is concerned Shia at 7% while 4% constitute to Ahmaddiyya, Sufi and Tabliq Muslims. The traditional religion, an ancient belief only represented Baha’i faith non-Christian religions and non- religious / pagans constituted to 2.7% all combined. What a rich blend in the spiritual world! Only in here, visit here for multi-religious treat.

The Economy hints on rejuvenation signs with discovery of crude oil and natural gas reserves of un evaluated sum under crust of the Albertine rift valley floor yet to be harnessed to add value to the promising tourism fraternity, Service sector & life time bread winner of the economy, the agricultural sector that contributes more than half of revenue from exports as evidenced from the 1986 coffee the dominant export raised 56%GDP.  More establishments are being opened up on large, medium and subsistence scale for SME steering to an estimated economic growth to 2.5% as of 2003 this way far below the poverty growth rate reported at 3.7% following successive research identifying Uganda as one
of the poorest with over 37.8% of the total population living on less than $1.25 a day of 2012. In a related development, one is right to pin it (Uganda) member of the heavily indebted LDC’s following the Word bank report of 2012 with inflation rate 4.6% of Nov, 2016.

In a bid to address the worsening situation, the government has embarked on the stock market as an avenue for privatisation where the capital market authority has welcomed and accredited about 18 brokers, asset managers, and stock advisers as the Baroda Capital Markets Uganda Ltd, African Alliance Investment Bank, Crested Stocks and Securities Ltd, UAP Financial Services Ltd and Equity Stock Brokers Uganda Ltd among others all aiming at increasing formal domestic savings. Being land locked, Uganda has been collaborative and sustained good relationship with her neighbours Kenya and Tanzania that help it to access the Ports on the Indian ocean especially Mombasa but on one hand acts as hub to other countries as Rwanda, South Sudan, DR.Congo Burundi following to its strategic location in the heart of Africa.