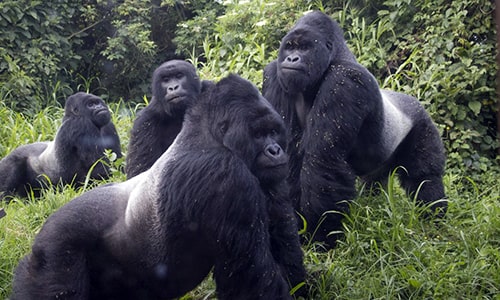 The good conservation news is that Mountain Gorillas are no longer critically endangered but merely Endangered. According to the latest assessment published by the International Union for Conservation of Nature (IUCN), Mountain gorillas, a subspecies of the eastern gorilla, have been re-categorized from the status of Critically Endangered to only Endangered in an update to the Red List. Thanks to the gorilla conservation efforts by various stakeholders in wildlife protection.

The reclassification follows an intensive conservation action and concerted efforts among organizations and groups in the Democratic Republic of Congo, Rwanda and Uganda.

Going by IUCN’s definition of being Critically Endangered (CR) species is when they facing an extremely high risk of extinction in the wild.

How IUCN looks at the two concepts of Endangered and Critically Endangered.

Endangered – These organisms face a great risk of extinction in the near future. The populations of such organisms are carefully watched and there are substantial fines and jail time for when someone is found hunting or harming species considered endangered. Examples here include Asian elephants, green sea turtles, mountain gorillas (recently added) and blue whales.

Critically Endangered – Species in this category are likely to go extinct in the near future unless severe actions are taken to make sure their endurance. It so happens that many of these species were over-hunted, over-fished, over-cut or continue to be hunted illegally (poaching). Examples include the Bluefin tuna and the California condor.

In the world, there are only four mountain gorilla national parks including Bwindi Impenetrable Forest and Mgahinga National Park in Uganda. Others are Volcanoes in Rwanda and the Virunga National Park in the Democratic Republic of Congo (DRC). An approximated 1000 mountain gorillas live in these parks with half the number being Bwindi forest alone.

In 2008, the mountain gorillas numbers were projected to 680 members but the most latest estimations show a likely rise to over 1,000 individuals.

“Whilst it is fantastic news that mountain gorillas are increasing in number, this subspecies is still Endangered and therefore conservation action must continue,” asserts Dr Liz Williamson of the IUCN’s Species Survival Commission (SSC) Primate Specialist Group.

“Coordinated efforts through a regional action plan and fully implementing IUCN best-practice guidelines for great ape tourism and disease prevention – which recommend limiting numbers of tourists and preventing any close contact with humans – are critical to ensuring a future for the mountain gorilla.”

Gorilla tourism has as well helped in boosting conservation efforts by governments, organizations and communities that live nears the parks.

A permit for trekking gorillas in Uganda is at $600, in Rwanda at $1500 and $400 in Congo. Such figures are an indicator of the gorilla importance to governments and the populations.

Due to the rigorous safeguard efforts the late Dr. Dian Fossey started before her death, mountain gorillas have reached a new momentous landmark. Their numbers have progressively enlarged over the past three decades to about 1,000 gorillas in total.

From Critically Endangered to merely Endangered, more energies are needed to elevate their status Vulnerable/Threatened, Near Threatened or Least Concern primate categories whose likely extinction will no longer be anyone’s worry.