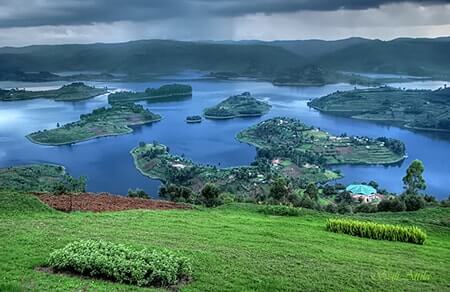 There are several Lakes in Uganda ranging from freshwater to craters spread across the country. Four of East Africa’s Great Lakes–Lake Victoria, Lake Kyoga, Lake Albert, and Lake Edward lie within Uganda or on its borders. Lake Victoria dominates the southeastern corner of the nation, with almost one-half of its 10,200-square-kilometer area lying inside Ugandan territory. Other lakes in Uganda also include Lake Nabugabo south of Lake Victoria in Masaka area and Lake Wamala,

How many Great Lakes are in Uganda?

Of the African Great Lakes, Lake Victoria, Lake Albert, and Lake Edward are partly located in Uganda. These lakes all drain into the White Nile, one of the two main tributaries of the Nile.

Which is the deepest lake in Uganda?

Lake Bunyonyi is located at 1,962 meters above sea level, about 25 km long and 7 km wide which makes it the deepest lake in Uganda and the second deepest lake in Africa after Lake Tanganyika.

What is the biggest man made lake in Uganda?

Historically, the Kabaka’s lake is the largest Man-made lake in Uganda and its said to be Africa’s excavated lake. During the construction of the lake, 52 tribes of Buganda cooperated and agreed to construct the Kabaka lake.

Which is the Salty lake in Uganda?

Lake Katwe is known throughout Uganda and the East African region for its substantial salt production and has been producing high quality salt for many years. Geographically, Lake Katwe is found within an explosion crater in the formerly active volcanic area north-east of Lake Edward and south-east of Lake George.

Which lake is most swampy in Uganda?

Lake, Kyoga also spelled Kioga, lake located north of Lake Victoria in central Uganda, formed by the Victoria Nile in its middle course. The many-armed lake is shallow, with swampy, papyrus-reeded shores; masses of papyrus are broken loose by strong winds and at times have completely blocked the river.

Which Lake in Uganda has blue water?

The silver blue waters of Lake Nyabikere gives a tandem feeling found nowhere else but only here, from the tall vegetation around the lake edges to the wonderful picturesque views across the lake, Lake Nyabikere has attracted an insight authentic destination for all Eco-tourism safaris for the visiting travelers on a …