Lake Mutanda is a small freshwater lake in the far southwestern Kisoro District lying about 20 kilometres (12 miles) north Kisoro town. Mutanda, one of the tourist places in western Uganda is roughly 454 kilometres by road southwest of Kampala City. Lake Mutanda, among Uganda’s tourist destinations is huddled in the Range foothills at an altitude of 1,800 metres (5,900 feet). Due to its clear views, the three volcanoes within the Virunga range which include Mount Muhabura, Mount Sabyinyo and Mount Gahinga and are partly positioned in Uganda can be observed openly from the lake. The lake with several islands is drained by the Rutshuru River that flows northward to Lake Edward. 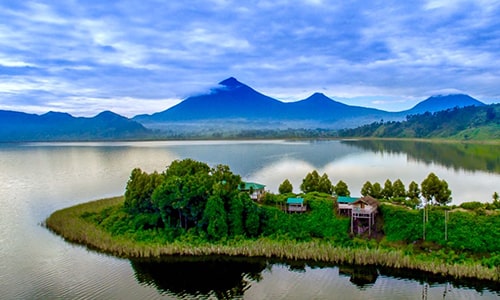 The environs on the lake’s islands and the nearby countryside include waterside wetlands and nearby forests habitations that provide a sanctuary for the endangered mountain gorillas. Besides mountain gorillas and golden monkeys in the proximate Mgahinga Gorilla National Park, one of the gorilla parks in Uganda, the lakeside surroundings accommodate a diversity of animal and vegetation species, exceptional to this region. Bird types around the Lake Mutanda include kites,  kingfisher birds,  ibis and the crested crane, Uganda’s national bird among others. Weaver birds are very common among the reeds along the lake shorelines. With its lodge facilities, the lake is a very good base for visitors going for gorilla trekking in Mgahinga Gorilla National Park‘s only gorilla group, the Nyakagezi Family.

On top of the plentiful and wide-ranging avian species, Mutanda’s water shores support numerous species of chameleons, snakes, monitor lizards and frog species. There are also lavish stocks of different insect life around the lake. Mammals exclusive to Lake Mutanda are the African clawless otter where the Hippopotamus was prevalent to the area but no longer visible as they were last seen at there in 1994.

Lakes Mutanda together with Lake Bunyonyi form the core of what has been titled the Switzerland of Africa. Created by river valleys long-dammed by volcanic eruptions, the two lakes in south western Uganda form an ever-changing water scape characterised by several tiny forested islands. Mutanda is an outcome of the strong volcanic forces that characterized the location thousands of years ago. There are dozens of islands that enhance the scenic beauty of the lake.

Other Lakes in Uganda

Apart from this tiny, there are other freshwater lakes in Uganda which include Lake Victoria and its beautiful islands and nice beaches. Victoria is a home to Ssese Islands, famous for holiday relaxation, thanks to its numerous hotels and lodges positioned along its white sand shorelines. Other water bodies in Uganda in the lake category are Lake Kyoga, Lake Wamala, Lake Edward and Lake George among others. Lake Edward and George are found in Queen Elizabeth National Park in western Uganda.

The lake can well be accessed from Kisoro town. The Lake is well positioned between Mgahinga Gorilla National Park and Bwindi Impenetrable National Park, homes to endangered mountain gorillas in Uganda. The Lake has accommodation facilities near which include Chameleon Hill Lodge and the Clouds Lodge which are luxury accommodations for mainly visitors going for gorilla trekking. Chameleon hill lodge is colorful accommodation facility on the shorelines of Lake Mutanda and acts as an ideal base for gorilla trekking in Rushaga region and Nkuringo Gorilla Sector of Bwindi Forest.