Lake Bunyonyi, locally meaning a Place of many little birds is found in South Western Uganda between Kisoro and Kabale approximately 450 Km from Kampala. It takes roughly 7-8 hours from Kampala. The lake is also about 100 km from Kigali, the capital city of Rwanda. Lake Bunyonyi, one of the holiday destinations in western Uganda is a hot vacation  spot for travelers who are going for gorilla trekking in the nearby Bwindi Impenetrable Forest or Mgahinga National Park for some Uganda Safari activities. 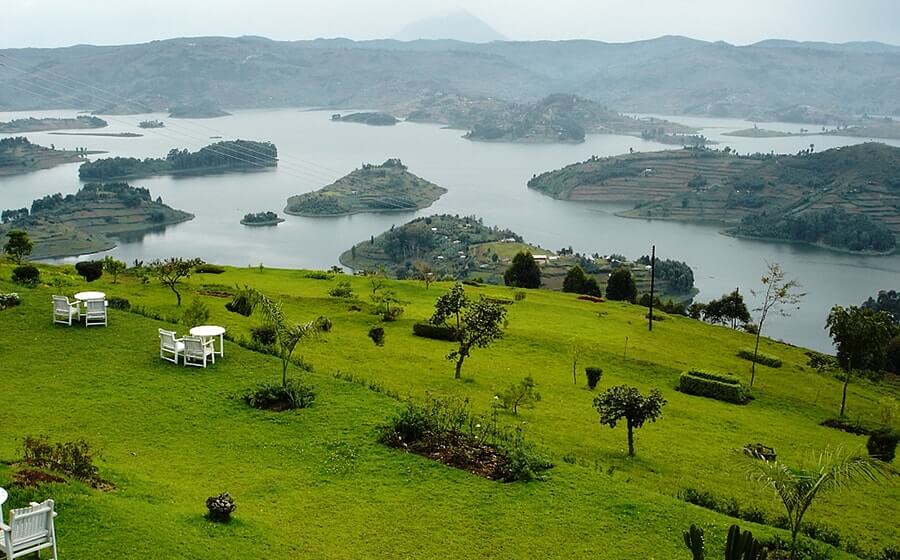 Lake Bunyonyi located at 1,962 meters above the sea level is 25 km long and 7 km wide covering an area of 61 square kilometres. The lake is believed to be the deepest lake in Africa with varying length of between 44 m to 900 metres. The bilharzia-free lake is safe for swimming. The lake featuring on the 5,000 Ugandan shilling notes has 29 islands that include Punishment Island and Bushara Island which are all concentrated in the central part.

Located seven kilometres west from Kabale Town, southwestern Uganda, Bunyonyi is surrounded by hills that are 2,200 to 2,478 metres high and intensely cultivated. Its unique beauty and a number of accommodation facilities makes it a visitation darling of many foreign and domestic tourists. The temperature on the surface of Lake Bunyonyi rises to 25 degrees Celsius.

In the beginning of the 20th century, fish were introduced to the lake and in the 1930s fishing became profitable. Unfortunately in the 1960s the fish died massively as a result of a violent shallow mixing, likely caused by wind. Subsistence fishing prevailed in the lake, people mostly caught clarias species – the lake’s depth and stratification makes it difficult for the breeding of the common Ugandan species Nile Perch and Tilapia. Nevertheless, 300,000 Nile Tilapias and Clarias fish were released in the lake at the end of 2002. Also present in the lake are Mud fish, Cray fish and Mirrowcarp plus a plenty of their predators, otters.

About 200 bird species have been recorded at the lake area since “Bunyonyi” also means “the place of many little birds”. The bird species include the White tailed Blue Monard, grey crowned cranes, the African Harrier Hawk, Herons and egrets, the Levillant cuckoo, the Cardinal Woodpecker and the Rufous-breasted wryneck. Weavers nesting on the Island, include the large golden, slender-billed Baglafecht, as well as the yellow-backed and spectacled weavers. The lake’s main centre is Bufuka Village. The area’s inhabitants are from the Bakiga and the Batwa tribes.

The lake is characterized by several islands that make up its unique natural beauty. Various activities take place on these amazing islands which are accessible by engine boasts or canoes.

This island also a place for Lake Bunyonyi Development Company, an organization with strong links to Church of Uganda, the main church of the lake area. Tourism is the main source of funds for various developments around Bunyonyi areas. This island has many luxury tents, chalets, and also campsites for tourists to stay on. You can also hire canoes and sailboats to sail around the lake and its other islands. The island is forested with mainly eucalyptus trees that grow fast.

The Bakiga used to leave unmarried pregnant girls on this small island with a tree to die of hunger or die while trying to swim to the mainland as swimming skills were rare. This was to educate the rest, to show them not to do the same. A man without cows to pay the bride wealth could go to the island and get a girl. In the first half of the 20th century, the practice got abandoned but is still possible to find women who were picked up from Punishment Island today.

Around 1921, an English missionary, Dr. Leonard Sharp visited this place and established a leprosy treatment centre on the then uninhabited Bwama island in 1931. A church, patient quarters and a medical facility were built, while Sharp settled on Njuyeera Island meaning ‘white cottage’, after the similarity of the doctor’s small white house to Sharp’s father’s house in Shanklin, now The White House Hotel. The rationale of the leprosy colony was that of ‘voluntary segregation’, where the provision of a happy community to live in would attract leprosy sufferers, so removing them from the communities where they might infect others. The hospital buildings are used by a boarding secondary school which attracts students from the entire region and there is a primary school but no village on the island.

This island, according to legendary stories killed many people. About twenty were once brewing local sorghum beer there. An old woman was passing by and she said: “Can you give me some local beer?” They wrongly though that she was a beggar they knew. They refused her: “Get lost, beggar! Get lost!!!” The old woman asked: “So you will not even give me a sip? Can I at least get somebody to take me to the mainland?” They answered: “Yes, because we are fed up with you!” They chose a young guy to take her over. When they reached the shore and the guy was just beginning to return, the island turned upside down and they all perished but only a chicken flew away and survived.

Lake Bunyonyi islands are some of the most beautiful parts of Uganda. Located at high altitude (6,500 feet above sea level), the beautiful, scenic, erratically shaped lake shares its shores with Rwanda. Besides its charming green surrounding intensively cultivated terraced-hillsides, there are opportunities for caving, exploring the Islands of Akampene, Bushara, Bwama, Sharp’s Island, etc.  The islands’ rich history will be unveiled to you by the local guides.

honeymooners get extra care with surprises like the free fruit basket, chocolates, roses, wine and special meals. Out on a tour, the tour guides are attentive to your needs.

Bunyonyi means a place of little birds. Every day, you wake up to the songs of the weaver birds. Common birds include the White tailed Blue Monard, African Harrier Hawk, Levillant cuckoo, Cardinal Woodpecker, Rufous-breasted wryneck. Weavers nesting on the Island include large golden, slender-billed, baglafetch, yellow-backed and spectacled weavers. Bird life is inexhaustible with over 200 species recorded, including the Uganda’s National Bird the Crested Crane a common sighting. Most satisfying is the Island to Island birding voyage on the motorboats.

The guided trench canoe trip is a famous activity as you visit the Islands around and the beautiful hills. You may enjoy Cray Fishing and photography. Lake Bunyonyi is bilharzia-free and is one of the clearest water bodies in Uganda. And it is the deepest Crater Lake in the country with around 6,500 feet above sea level. A canoe ride at night thrilling given the loud chorus of crickets, frogs, nocturnal birds magically in sync with the rippling water that makes the ride extremely interesting.

Accommodations around the lake 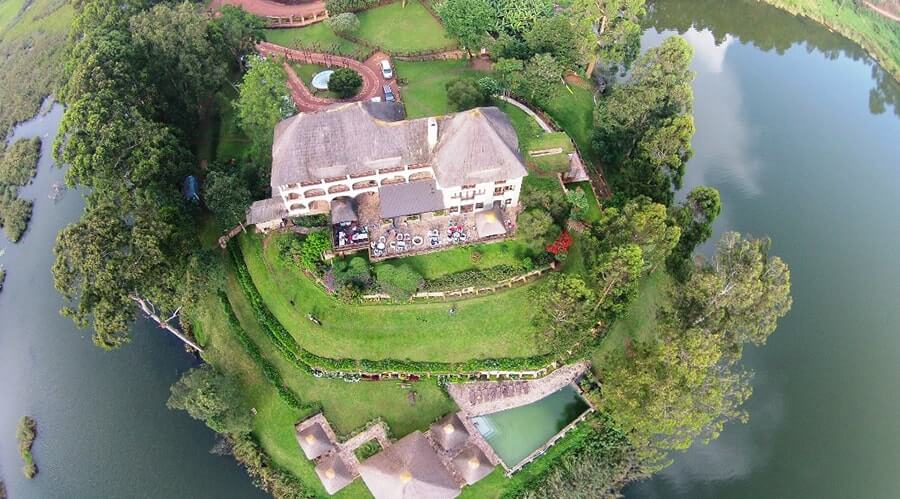 The magnificent water body has got lodges and resorts of all categories ranging from budget, mid range to luxury class. These include:-

We will take you for the 3 days tour of Lake Bunyonyi to enjoy and experience nature, relaxations as well as the communities around the water body including the pygmies.

How to Get to Lake Bunyonyi

In case you are to visit Uganda through Entebbe, you will drive by road to the magnificent water body. The trip takes you through Mpigi, where you would stop at the Uganda Equator before proceeding to make another stop at Mbarara City for lunch. From Mbarara, continue to Kabale town and take Kabale – Kisoro road to reach the lake. Alternatively, you may tour the lake from Kigali in Rwanda. The lake being between Kabale and Kisoro, it is closer to Kigali than it is to Kampala or Entebbe. It can take between 3 to 4 hours of road transfer from Kigali. Whether you come through Cyanika Border or Gatuna entry point, it will offer a nice experience of admiring the hilly green topography.

You may choose to visit the lake alone just for 3 to 4 days and return to Kampala or Kigali. Alternatively, you may go to the lake as a supplementary programme on gorilla trekking in Bwindi or Mgahinga Gorilla National Park. At times, people visiting Uganda to see gorillas request to have the lake included in the itinerary to proceed or come after the endangered gorilla adventure. Either way, the programme is doable. Other may go the lake after touring other holiday destinations in western Uganda like Queen Elizabeth or Lake Mburo National Park. Lake Mburo being on a highway from Kampala, can easily be included in the programme. In a nutshell, whether you are visiting the Pearl of Africa for gorilla tracking, golden monkey trekking in Mgahinga, game drive safari, Kazinga boat cruise or chimp adventure in Queen Elizabeth National Park or any other nearby or distant tourist destination, you can smoothly include Lake Bunyonyi in the safari plan.

Other Related Lakes in Uganda

Other Lakes in Uganda include Lake Victoria, the biggest lake in Africa shared among three East African countries including Uganda, Kenya and Tanzania. There are also Lake Edward which is joined to Lake George by Kazinga Channel in Queen Elizabeth National Park. Also Lake Mutanda is another holiday destination in the far southern district of Kisoro. The lake has got several holiday lodges and resorts that make it an ideal vacation hub in Uganda. Lake Mburo itself is a smaller but wildlife-rich national park in western Uganda and attracts a good number of visitors who love game drive safaris, relaxation as well as boat cruise. Other lakes in Uganda include Lake Wamala, Lake Kyoga and Lake Albert among others.