Kyambura Gorge is located in the far eastern side of Queen Elizabeth National Park in south western Uganda. About 1 km across and roughly 100 meters deep, the gorge also known as the ‘Valley of Apes’ is drained by River Kyambura. Kyambura landscape is one of the most impressively extraordinary topographies you will find in Uganda and it is enclosed in a rich wildlife bio-diversity which contains of good numbers of primates, wild animals and birds.

The Gorge also known as Kyambura Wildlife Reserve or Kyambura Game Reserve is a section of the spectacular Queen Elizabeth National Park, one of the biggest parks in Uganda. The majority of visitors into the park are offered chimpanzee trekking safari adventure to this incredibly fascinating Kyambura canyon as an additional bonus to the main wildlife safaris involving game drives and a boat cruise.

When you enter into this remarkable Gorge, you will be impressed by the green, rich tropical forest nearby the Equator crossing making it another territory on its own. The Savannah above the gorge has a sensible aggregate of sun shine that provides brightness. The tree cover in the under-ground jungle encompasses of rich chunks of plant life locked out much of the sun rays. Except when you are standing in a clear place, you certainly not need sunglasses or caps for a need to have a clear view for the great variety of Wonders within the Gorge. 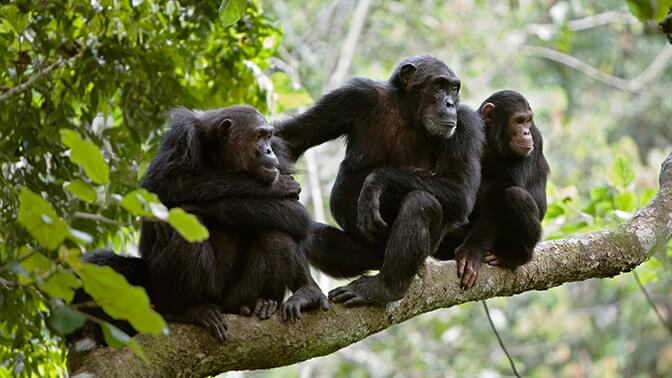 Chimpanzee Trekking is the main safari activity in Kyambura Gorge. Most of the Chimpanzees in the gorge have been habituated meaning they are acquainted with human beings to the reality that they are can freely do their daily activities in the presence of people. Tours in the gorge are done between 1 – 3 hours and usually begin at 8:00 am and 2:00 pm every day.

Besides chimps in the gorge, there are other primate species found there like the Red Tailed Monkeys, Black and White Colobus Monkeys, Giant Forest Hogs, Baboons plus other mammals.

For bird watching, this valley of Kyambura is a birder’s Paradise and Butterflies abound. Around 332 bird species have been recorded in this Kyambura Wildlife Reserve with seven types of universal conservation concern.

Getting to Kyambura Gorge

In case you are travelling from Kampala, Uganda’s Capital City via Mbarara town, the place is 420 kilometres to be reached. And if you are moving from Kampala going through Fort Portal, you will cover a distance of 410 Kilometres. Ugandan Local Charter flights are available from Entebbe International Airport to the Airstrip in southwestern Uganda at Mweya or Kasese, flying for about an hour.

Accommodation Facilities around the Gorge

Kyambura Gorge is a part of Queen Elizabeth National Park. Within and outside the park is a collection of lodges good for use while of your Uganda safari to have a feel of the sights and sound this detached and impressive valley. Accommodation properties range from high-class, mid-range to budget lodges. Examples are Katara lodge, Enganzi Lodge, Jacana Safari Lodge, Kyambura Gorge Safari Lodge and Kingfisher Kichwamba Lodge among others.

The reserve is essentially the sole area where one can visit habituated chimpanzees on a chimp trekking safari in the park. Reservations for Chimpanzee tracking are made at the Mweya Visitor Information Centre in the magnificent Queen Elizabeth National Park. The Mweya Office as well offers information on game drives and additionally sells postcards and maps and for other species of primates like the red-tailed monkeys, baboons, black and white colobus monkeys and the vervet monkeys.

Kyambura Chimpanzee Habituation exercise lasted about 2 years. Habituation of chimps implies that these primates are used to be close people and can interact with ease, play, eat or jump freely in the presence of people.

The area also hosts a wider range of avian species including the African Fin foot, the blue-headed bee-eater and the diverse falcons. Large games like the gigantic forest hogs are common in the area. There gorge has got three salty crater lakes which attract a dozens of good-looking flamingo crowds that have not been seen anywhere in Uganda.

The precipitous hills of Kyambura Gorge were formed by the messy waters of the roaring River Kyambura. These slopes are shielded by a  green  riverine woodlands that are habitats to a variety primates including chimps, the black colobus monkeys, white Colobus monkeys,  red tailed monkeys and the olive baboons among others primates categories. Similarly, the green riverine jungle as well offer shelter to several forest birds and other species such as the Shoebill, Martial Eagle, Black-rumped Button quail, African Skimmer, Bar-tailed God-wit, Lesser plus Greater Flamingo, Chapin’s Flycatcher, White-tailed Lark, Corncrake, Verreaux’s Eagle Owl, Pink backed Pelican, Papyrus Canary, African Broad bill, White-winged Warbler, Black Bee-eater and the Papyrus Gonolek that are visibly common in the area.

The gorge of Kyambura can best be explored by hiking in form of a guided nature walk led by the proficiently experienced tour guides. The guides explain to guests the natural attractiveness of the valley, its flora and fauna plus its depths. When at this wildlife reserve, you will ably have a close experience of the noteworthy wildlife in the area including the rousing chimpanzee.

Kyambura Gorge chimpanzee tracking safari may actually be done independently from Kampala or be combined any other tourism activity in Queen Elizabeth National Park.  Based on the available time, the same chimps trekking is doable with other tour activities beyond the park like Gorilla Trekking in Bwindi, vacation tour of Lake Bunyonyi, Adventure of Rwenzori Mountain or Wildlife Safari in Lake Mburo. Queen Elizabeth National Park where Kyambura Gorge is found is almost in the middle of the geographically positioned tourist destinations.

Kazinga Channel is a 32-kilometre long water channel that connects Lake George in the east to Lake Edward in the west. The channel is among the most paramount geographical features in Queen Elizabeth National Park with a magnificent view of the most vital wildlife in the park.

The Ishasha Sector found in the Southern part of Queen Elizabeth National Park is well-known for the amazing Tree-Climbing lions. Lions that hang in the big fig trees are an exceptional attraction and a key highlight of any Uganda safari tour this large national park. The Ishasha lions relax in the tree branches as they also spy on their preys from above.

Kasenyi Plains are part of Queen Elizabeth National Park. It is at these plains that the biggest percentage of game drive Uganda Safaris are carried out from. The plains are found on the western shores of the  spectacular Lake George adjoining to the Kazinga Channel onto which the water makes a convergence.

Mweya Peninsula is found within Queen Elizabeth National Park on the northeastern shores of Lake Edward. The peninsula is the corner point where Kazinga Channel joins the lake. This beautiful piece of land surrounded by water either sides is approximately 66 kilometres by road from Kasese town.

Lake George found in western Uganda covers 250 square kilometres. The lake with an estimated depth of 2.4 meters is part of Africa’s Great Lakes system. Though the lake itself is not considered a Great Lake. This water body was named after a British Prince, George who later became King George V.

Lake Edward, the tiniest of the African Great Rift Lakes is positioned on the border between Uganda and the Democratic Republic of Congo. The lake is just few miles south of the equator. The first European to see the lake was Henry Morton Stanley, a Welsh explorer who visited the lake in 1888 during the Relief Expedition of Emin Pasha.

Maramagambo Forest is found in Bushenyi district and is a part of Queen Elizabeth National Park. The forest is prominently associated with the Bat Cave and the Python. The forest is bounded by two crater lakes, Lake Nyamasingiri and Lake Kyasanduka and is a home to the red-tailed monkeys, chimps  and Bates’ pygmy antelope (Neotragus batesi) among others.