Kazinga Channel Boat Cruise is one of the paramount activities by any one on a Uganda Safari in Queen Elizabeth National Park. Kazinga Channel is an expansive, 40 kilometre long waterway connecting the Lake Gorge and Lake Edward on the Uganda- Congo boarder. It is spectacular feature in the premier destination and conservation area that of about 1,7978 km.

The Boat Cruise on the Kazinga Channel is enormously worthwhile activity in the park and over time has been regarded among the best among the boat cruise adventures in Uganda. The channel shores lure a large number of wild animals like the hippos globally, elephants, Uganda kobs, Buffaloes, Water bucks, Elands, plentiful of crocodiles in addition to countless avian species with an average of 60 bird species guaranteed not to miss your sight. Kingfisher, Giant fish Eagle, Marabou stocks and notably African skimmers, the great cormorant and pelicans . These attractions are viewed at the most comfort zones on the launch trip down the course of the channel evident through the year from start of trip to the point where the channel connects to Lake Edward.

Kazinga Channel boat ride starts at the pier just on the foothills of the Mweya Peninsular 20 km off main road Kasese-Mbarara, operated for range between 2-3 hours. The cruise can be booked at 11:00 a.m, 2:00 pm and 5:00 pm local time depending to one’s preference. The channel runs between a tiny George of only 250 square kilometres situated on Eastern side and its water is accumulates from streams flowing down the stunning Rwenzori Mountains north of the lake. 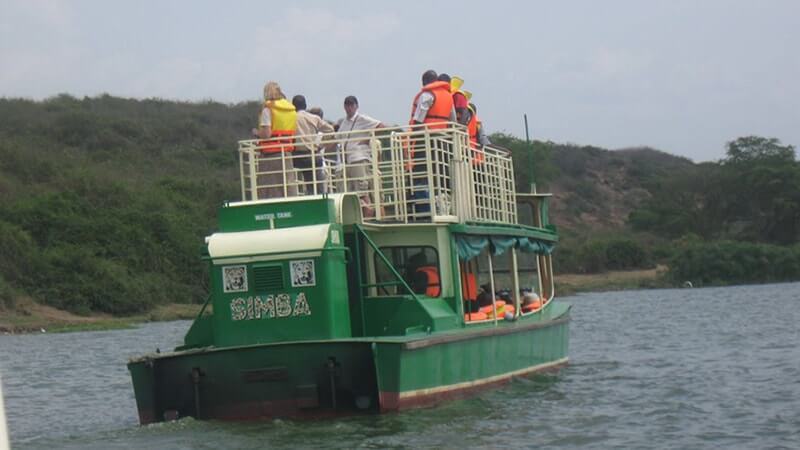 The outflow from Lake Gorge runs through this calm channel and drains west into Lake Edward one of the fresh water lakes in Uganda covering a total area of 2000 square kilometres. It has to be noted that the channel forms two wildlife sections like North Kazinga and Kasenyi that not only provide pristine scenic views of the landscape but also offers vast opportunities of seeing more game especially the King of the Jungle (Lion). There is a bigger possibility of seeing the bigger cats in the Northern section of the channel near to Mweya Peninsular, grassland thickets eastern section of Kasenyi plains. The trip truly quenches your desire for wildlife and beautiful views of plains with back drops of rolling ranges touching the sky in the extremes. Take your trip along the Kazinga Channel an oasis for many of the fascinating encounters in the medley of wonders.