Kampala City is the capital city of Uganda. Kampala is the largest urban centre found in the central region of Uganda, Kampala was made the nation’s capital city after Uganda had gained independence from Britain in 1962. The city is found within the District of Kampala in Buganda, which is the kingdom of the Baganda people, the largest of the traditional kingdoms in current Uganda. 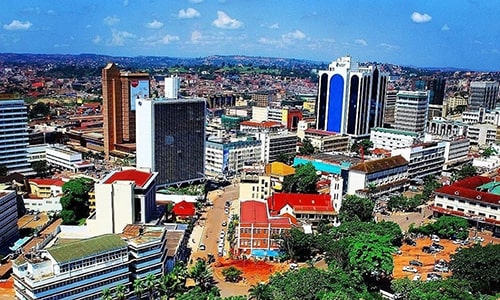 The name Kampala was derived from the British name for the area, “the hills of the Impala.” This meant “kasozi ka Impala”in Luganda local language. With time, local usage took to referring to the hunting expeditions of Kabaka, the King of Buganda, as Kabaka agenze Kampala (“The King has gone to Kampala”). Eventually the hills became known as Kampala.

Kampala city is one largest city occupying a series of hills at an elevation of about 3,900 feet (1,190 meters) and is located in the south of the country, north of Lake Victoria in Uganda.

According to tourism perspective, Kampala is very beautiful city with a number of attractions that are found within the city. The city itself is built on across seven famous hills which gives it magnificent and striking sceneries. We organize for you the best memorable Kampala city tour safaris, during your safari; you have got all the chances to visit the most popular historical, cultural and traditional tourist sites that are within the city. We also arrange for you safaris to visit other tourist sites near by Kampala region such as Jinja for white water rafting, lake Mburo national park for wildlife safaris, all the islands around Lake Victoria, spend time at one of the most tranquil beaches on Lake Victoria.

Book with us Kampala city tour safari that you will live to remember in your lifetime.

Kampala city is real a very nice place to visit as the city tour will include rotating all the seven fantastic hills. The city spreads to Nakasero Hill where the administrative center and the wealthiest residential area are. Tank Hill has a water tank, Mulago Hill has Mulago Hospital, the largest hospital in Uganda, and Makerere Hill is where Makerere University is situated.

The city continues to expand along both sides of the Makindye Hill and Konge Hill. Suburbs include Kololo in the East on Kololo Hill the highest hill, home to the Uganda Museum; Namirembe; Kibuli; Kabalagala; Rubaga; Ntinda; Najjera; Kisassi; Nateete; Kireka; Namugongo; and Najjanakumbi, among others. All these hills have amazing places of attraction as they will be shown below.

Kampala receives a relaxed warm weather throughout the year, making it the best destination to visit all the year through. However, much like the rest of Uganda, Kampala is best visited during the dry months June to September.

These dry months are also the comparatively cooler months in Kampala, with temperatures ranging between 20 to 22 degrees Celsius. This season is considered an ideal time to visit Kampala as the relatively low levels of rainfall allow for most outdoor activities and treks, and also better game viewing on the famous gorilla safaris. In addition to the June to September period, end December to February, is also a good time to visit, as the rainfall tends to decrease during these months.

The wet seasons in Kampala occur between March to May and October to January, with the maximum rainfall in the months of April and November. Being off-peak tourist seasons, whilst there are many discounts on offer when travelling during these months, the heavy rainfall makes most outdoor activities and safari’s quite difficult, thus often curtailing ones travel plans and causing iterations in the itinerary.

The people of Kampala and Ugandans in general, are very kind and friendly and are very approachable. The city comprises of different tribes the Baganda make up over 60 percent of the Greater Kampala region’s population, Banyankole 9.5 percent, Basoga 8.4 percent, Bakiga 6.9 percent, Iteso 6.4 percent, Langi 6.1 percent, Acholi 4.7 percent, Bagisu 4.6 percent, Lugbara 4.2 percent, Bunyoro 2.7 percent, other 29.6 percent, according to the 2002 census.

English is the official language, taught in grade schools, used in courts of law and by most newspapers and some radio broadcasts. Ganda or Luganda is the most common local language that is used, also used are other languages, Nilo-Saharan languages, Swahili, and Arabic. In the suburbs, local languages are spoken widely besides English, Swahili and Luganda.

How to get there.

Kampala can be easily accessed from all over parts of the world. Kampala is situated near Uganda international Airport in Entebbe. Upon reaching Entebbe international airport, you drive only 35 kilometers (22mi) to reach the city.

Kampala has well tarmacked roads that can help you reach the city from any direction. There are three methods of public transportation: boda bodas, matatu, and special hires. The fastest method is the boda bodas; motorcycles that you see all over the city. You won’t be in Kampala long before being propositioned by a Boda driver. If you’re not interested, a simple ‘no’ will get them to leave you alone.

Kampala city is the capital and busiest center of Uganda which has led to establishment of numerous luxury, mid-range and budget hotels in and around the city. To make sure you enjoy your stay in the city, we put together some of the top Kampala hotels where you can get accommodation. These include.

Kampala has wide range of different places of attraction that can be visited, the places are historical, cultural and religious tourism sites. Among the most tourists sites in Kampala are: From history to art to culture to the outdoors, Kampala attractions are plentiful. Comprehensive information on Uganda’s tourist attractions, historic monuments, sightseeing tours, outdoor activities, cultural activities, clubbing and great food, wine and many more. Below are some of the places of attraction in Kampala.

This is a display of Uganda’s cultural heritage where on can see ethnological and natural-historical exhibitions. It is a vivid reminder of the country’s colorful past.

Uganda national theater is situated along Dewinton road in Kampala is an important institution that came into existence since 1959 with the act of parliament of Uganda. It was aiming at providing a cultural theater for acting out arts, exhibition space and a stimulator to local artistic activities.

The Nommo Art Gallery is located at Nakasero, next to the State Lodge. The Gallery is the country’s center for various outstanding art works. The items houses range from pottery pieces to paintings and tie and dye.

Gaddafi national mosque is one of the buildings in Kampala that can be easily spotted in all over the directions.it has got good attractive gardens and the building its self is very attractive. The most is believed to be Uganda’s largest mosque with mosque positioned on the first floor and the offices are at the ground floor.

These are tombs that hold the remains of Baganda kings. There are so far four remains of kings that have been laid to rest at Kasubi tombs. This is world heritage site that occupies 30 hectares of land. The tombs remain an important spiritual and political site for the Baganda, as well as a tourist attraction.

The Bahai Temple House of Worship.

It is one of only seven in the world. It is known as the Mother Temple of Africa and is situated on Kikaya Hill on the outskirts of the city. The fifty acre property includes the House of Worship, extensive gardens, a guest house, and an administrative center. It was opened on January 13, 1961.

The shrine is located about 12 km from central Kampala along the Jinja Road, Namugongo. It is an established place of the martyrs’ execution.

Rubaga Cathedral is located on Rubaga hill, about 5 Kilometers north-west of the City center. The Cathedral is the seat of the Cardinal of the Roman Catholic Church in Uganda. Rubaga hill was formerly a palace of Mutesa I but was donated to Bishop Hirth by his successor Mwanga in 1889.

Namirembe Cathedral is located on a Namirembe hill adjacent to Rubaga hill. The hill is the seat of the Archbishop of the Anglican Church (Church of Uganda). The hill was donated by Mutesa I to the early missionaries in 1877. A Church was built at the site in 1880s and the Cathedral was built 1890.

Both Cathedrals are an attraction for religious pilgrims. Other visitors are attracted by the architectures of the cathedrals and the panoramic view of Kampala from the hills.

Kampala is the capital city of Uganda, has a number of extremely great sights, such as the parliament building, ideally situated on Parliament Avenue. You cannot enter this building when not on appointment, however it is extremely enjoyable to stand right in front of the building and take into account the decisions happening within that building.

This is the largest man-made lake in Uganda. The Lake is situated near Ndeeba Township, about 5 kilometers west of the City center, along the Kampala-Masaka road. It was dug on orders of Mwanga, a former king of Buganda. It is considered sacred by the 52 clans of Buganda whose leaders organize to keep it clean.

In the middle of downtown Kampala is a very busy market that seems built out of whimsy plus scraps than anything weight bearing. Within the tight, dirty halls of this inside/outside bazaar you’ll find nearly everything. Pink boa, Designer jeans, Fedora completed with feather, clothes from the 70s, disco suit all in different colors. However be mindful, pickpockets are plentiful and women are usually bothered when walking by themselves.