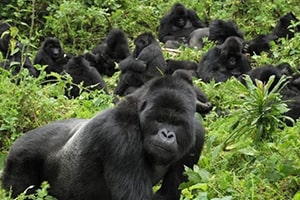 According to Rwanda Development Board (RDB), the Hirwa gorilla family was seen and identified by gorilla trackers on April 15, 2020 on their routine wildlife duties.

The gorilla family, one of the gorilla families at the Volcanoes national park had t crossed to Mgahinga Gorilla National Park in Uganda on August 28, 2019 creating a gorilla trekking vacuum in the park.

According to Rwanda officials, only 11 members out of the 17 individuals that crossed over to Uganda returned to their original home.

On a sad note, the 4 of the entire group members reportedly died from a lightening on February 3, 2020 and the other 2 members lost lives due to intestinal obstruction and respiratory infection.

In the same group, a baby gorilla was born in January 2020 in Mgahinga Gorilla National Park and unfortunately died shortly due to intestinal obstruction of the colon.

RDB said in a statement on Saturday 24th April 2020 that the movement of mountain gorillas within the Virunga massif is a common occurrence caused by various factors.

“Reasons for the cross border movements include seasonal food availability plus the social interaction among the various gorilla families,”

The tourism body further asserted that the inter-group competition for food and reproduction are also key determining gorilla home range changes over time.

Other Gorilla Groups in Rwanda

Gorilla tracking in Rwanda only takes place at the Volcanoes National Park, one of the four mountain gorilla national parks in the region. These parks include Bwindi Impenetrable Forest and Mgahinga National Park in south western Uganda, Volcanoes in Rwanda and Virunga National Park in Congo. One needs to book a gorilla permit in order to visit and trek the endangered primates in any of the 3 countries. A permit in Rwanda is priced at USD 1500, a price that was increased from 2017 from USD 750 then.

If you find gorilla tracking in Rwanda not affordable due to high price for a gorilla permit, you can fly into Rwanda and trek gorillas in Uganda at cheaper rates. Uganda with two gorilla parks with over 20 gorilla families has several trekking options for budget, midrange and luxury travelers. A gorilla permit in Uganda is at USD 700 which is quite friendly. To see gorillas in Uganda, you may decide to go through Kigali to Uganda for Gorilla trekking and return. Alternatively, you may go through Entebbe to Bwindi or Mgahinga by flying or road. Whatever route or option you choose to undertake, Gorilla Trekking Services gives you assurance that you will have the best gorilla trekking experience in Africa.