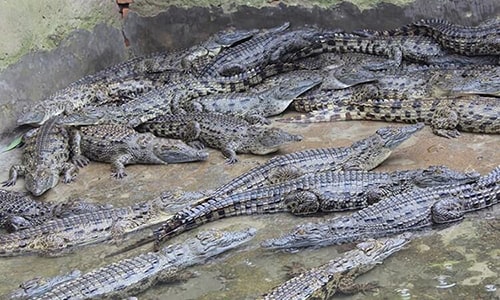 Buwama Crocodile Farm is situated in Mpigi district in the western just 70 kilometres from the capital city of Uganda, Kampala. Its is one of the places in the country where Crocodile tourism in Uganda can be done.

The crocodile farm is accessible off Kampala – Masaka Highway, a route to western Uganda. When you reach Buwama town, you will branch off from the main road and move 9 kilometers to reach the farm that serves both commercial and tourism purposes. This reptile farm is anticipated to host over 4000 crocodile species kept according to their age, size and sex.

The farm is situated on Lake Victoria shores providing an opportunity for visitors to relax and enjoy the beach life full of water breeze. At this farm, there are some self-contained bandas, which can provide accommodation to the overnight visitors and excursionists. These accommodation bandas range from single to double bed facilities.

Besides watching the crocodiles, the crocs farm has got other number of activities that are carried out at the site like as swimming, soccer, swinging, bird watching and nature walk around the place among others. The brave and non-nervous visitors may be given a chance to hold or lift up some baby crocodiles just to have a feel of these much feared reptiles when grown-up.

Being off along Kampala-Masaka-Mbarara highway, the farm visit can be incorporated well in several Uganda safari packages for tourists going to visit some of the national parks or tourist attractions in Western Uganda. These include Lake Mburo, Queen Elizabeth, Bwindi Forest and Mgahinga National Park plus a variety of attractions in the region.

One can visit the farm enroute to or from a Uganda Tour Safari as time may allow. The crocs farm ideal for touring when going to some of the tourist attractions in western Uganda which include Lake Mburo, Queen Elizabeth, Bwindi forest, Lake Bunyonyi or Mgahinga Gorilla National Park. Before or after tour activities to the above destinations would be the best time to turn off Kampala-Masaka highway for a few hours’ crocodile adventure.

Buwama Crocodile Farm sanctuary can also be visited in a one-day tour which starts from Kampala early in the morning and return in the afternoon or evening. Such trip is among the several Uganda short tours that we offer also as a company.

Other places in Uganda where crocodiles can be spotted include Murchison Falls National Park on the banks of River Nile, some shorelines of the mighty Lake Victoria, Queen Elizabeth Park, Semuliki National Park, Lake Mburo Park as well as the Pygmy Nile Crocodiles of the Kidepo Valley Park. Crocodiles are well seen by visitors on boat cruise safaris in the parks.

Tourist activities at this site include seeing the feeding of these reptiles that is usually done mainly two days a week. One can also make a nature walk around the place as long as picnicking and enjoying of the crocodile meat, which is said to be very delicious. The place can be visited when you book a 1 day trip to this reptile farm. When visiting the crocs project, you will have an advantage of stopping at the Uganda Equator in Kayabwe along Kampala – Masaka highway for some photo opportunities.

Other Places to see Nile Crocodiles in Uganda