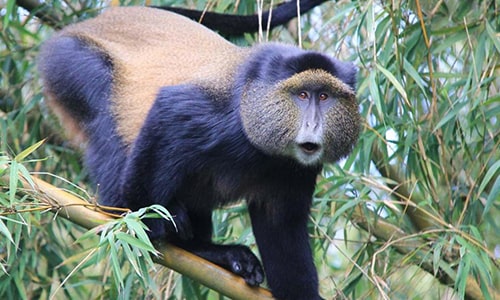 This safari adventure for trekking golden monkeys in Rwanda, you need to sleep in Kigali a night before the tour date.  The trip involves waking up at 4:00 am, take a shower followed by breakfast and then leave the hotel at 4:30 am. The road trip from Kigali to Volcanoes National Park takes between 2 to 2:30 hours. On arrival at Kinigi, the Volcanoes park offices, you will straight away have briefing about the rules and regulations regarding the trekking of these monkeys in Rwanda. During the pre-gorilla trekking briefing, the guides also highlight on what you should expect while in the jungle. When done with the briefing, your driver guide will drop you to the hiking starting point. You will then commence the trekking excursion into the jungle in search of the shy and playful golden monkeys of the thick Volcanoes Park. The Golden Monkey tracking excursion is similar to the gorilla trekking adventure. Both are primate encounters where one visitors are required to have trekking permits booked prior to the trip. The trekking through the garden, bushes and hills into the forests to see the monkeys is also similar to gorilla escapade.

Golden Monkeys are very playful animals and tend to move quite faster. In case you need to take their pictures, you must steadily act fast in order to capture the best images. The good thing with these monkeys that are trekked in the park, they are used to the presence of human beings and the likelihood of running away upon seeing visitors is very minimal.

After Trekking the Monkeys

After trekking golden monkey tour,  you will have lunch at Lapalme Hotel or any other accommodation in Kinigi area. After lunch, you embark on the road transfer back to Kigali where you will arrive in the evening hours. While in Kigali, your driver guide will drop you to your accommodation or to the airport in case you have an evening flight out of Rwanda. This marks the end of a 1 day Golden Monkey trekking safari to Volcanoes National Park in Rwanda.

If you do not visit these monkeys in Rwanda, you can alternatively trek them in Mgahinga Gorilla National Park in south western Uganda. Mgahinga is the only tourist attraction in Uganda where golden monkeys live and trekked by visitors. In case you want to experience Uganda, you can do a 1 day golden monkey trekking in Uganda from Kigali. Such trip is also possible in case there are no permits for trekking these monkeys in Rwanda, a thing which is rare.  A day trip starting from Kigali to Mgahinga Gorilla National Park in Uganda is very much doable since the park in south western Uganda is very near Rwanda. Golden monkeys are some of the tourist attractions in Mgahinga National Park. It takes like 4 hours’ drive to transfer from Kigali to Mgahinga. The most convenient safari would be a 2 day golden monkey safari tour to Volcanoes Park in Rwanda. This trip gives you enough time for a smooth transfer and resting with less rushing.